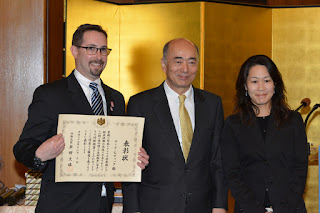 Marc Hitzig, the Executive Director of the Japan-America Society of Washington DC, was recognized for his achievements during the 70th Anniversary of Peace between the United States and Japan. Over the years since becoming executive director, Hitzig has shown his commitment to the U.S.-Japan relationship by dedicating himself to strengthening programs such as the popular Sakura Matsuri-Japanese Street Festival, National Japan Bowl, and Japan in 20xx. Hitzig said he was honored to receive the award, and “would like to thank everyone I work with, especially the JASWDC staff, volunteers and a special thanks to my family for all their help and support over the years.”
To view the other 2015 awardees please click here.