The Japan-America Society of Washington DC (JASWDC) deeply mourns the passing of Ambassador Walter Mondale on April 19.  After a distinguished career serving his country as Senator from Minnesota, Vice President under President Carter, and the Democratic Party candidate for President in 1984, Mondale accepted President Clinton’s request in 1993 to return to public service as the American Ambassador to Japan.

Ambassador Mondale came to Tokyo at a critical juncture in US-Japan relations. The Cold War that had served as the glue of the US-Japan alliance had ended, allowing long-festering trade issues to rise to the top of the bilateral agenda and sour relations. At the same time, the US-Japan security relationship was adrift, with no clear rationale or focus after the collapse of the Soviet Union. The 1995 attack in Okinawa by three American servicemen on a Japanese schoolgirl created a crisis in the alliance. Ambassador Mondale played a critical role in managing these issues and establishing a new post-Cold War foundation for the US-Japan relationship, formalized during a 1996 visit to Japan by President Clinton and the issuance of the US-Japan Security Declaration.  This foundation is being built on today by President Biden and Prime Minister Suga.

Ambassador Mondale approached his responsibilities in Japan the same way he approached all of his public duties: with humility, humor, steadfast integrity, and a deep respect for the role of government and the public servants who make it work.

Ambassador Mondale and his wife Joan were deeply committed to strengthening the people-to-people and cultural ties between Japanese and Americans, particularly through educational exchanges.  They were both strong supporters of JASWDC, our fellow Japan-America Societies, and the Maureen and Mike Mansfield Foundation, where Ambassador Mondale served for six years as Chairman. Ambassador Mondale served as an honored speaker at JASWDC’s 50th and 60th anniversary dinners and received the Society’s Marshall Green Award in 2017 in recognition of his sustained and significant contribution to the relationship between Japan and the United States.

As friends of the US-Japan relationship, we will miss Ambassador Fritz Mondale, and we send our sincere condolences to his family. 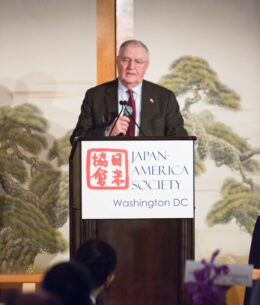