The Japan-America Society of Washington DC (JASWDC) is excited to announce that the 29th National Japan Bowl, otherwise known as Digital Japan Bowl II, will be held on Thursday and Friday, April 8-9, 2021.

Following the success of last year’s Digital Japan Bowl, the Society will hold the 2021 competition online, welcoming students from around the country and beyond to participate in a digital, real-time competition over two days. We hope to ensure the safety of all participants, but also allow all the students to put their hard work to the test.  It is our aim to offer students a modified competition and a rewarding experience that celebrates their dedication to learning about Japan. In this modified version of the competition, students will trade in their physical question sheets for a microphone, computer, and smart phone!  In between rounds participants will also be able to enjoy live and recorded workshops hosted by Japanese cultural groups in smaller “breakout sessions.”

The Championship Rounds and Closing Ceremony will be live-streamed on YouTube from 6-9PM EST on Friday, April 9. Viewers can expect appearances from Japan Bowl Honorary Patron Her Royal Highness Princess Takamado and other Japan Bowl supporters alongside surprise VIP guests to be announced closer to the date.

JASWDC organizes the Japan Bowl each year to recognize and encourage students across the United States who have chosen Japanese as their foreign language, and this year is no different. For these students, the Japan Bowl is not just a challenging and fun competition, it also provides a chance to experience Japanese culture firsthand and to meet other students who share their interest in Japan and its language.

Q1: What is the origin of the word

AN: empty/ without orchestra

Q2: There are statues of dogs at the entrance to Shinto shrines all over

Japan. What are those statues called in Japanese?

Summary of the Event

Each spring the Japan-America Society of Washington DC welcomes 200 of the country’s top high school Japanese language students to the nation’s capital for the competition. The National Japan Bowl is a high-level, high-intensity competition that tests students’ knowledge of Japanese language and of the culture, history, and social context that bring the language to life.

The Japan-America Society of Washington DC has supported the creation of twenty regional Japan Bowl competitions across America and around the world, giving the program a global impact.

For more information about the National Japan Bowl, visit www.japanbowl.org or contact Nancy Marsden at the Japan-America Society of Washington DC, 202-833-2210, or japanbowl@jaswdc.org. 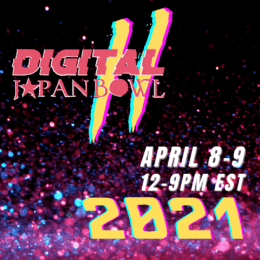