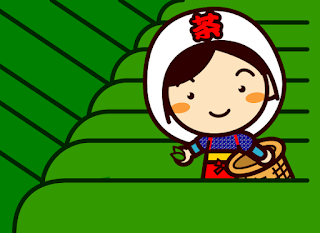 This month’s word is Chatsumi/Tea-picking
Green Tea is the main drink of Japanese people. Picking the young sprouts and leaves of the tea bush occurs over some three weeks from mid-April till the end of May, especially during the two to three weeks following the 88th night (Around May 2) when the tea-picking season is at its height. After the picked tea leaves are steamed, they are massaged the same evening. In the past, tea used to be picked by young girls with their sleeves tucked up with a red sash and a rolled-up towel tied around one’s head while singing a tea-picking song, but along with the advance of mechanization, the artistic effect of old has been lost.
Credit: Bilingual Handbook on Japanese Culture