WASHINGTON, D.C. Japan-America Society of Washington DC is pleased to announce that The Honorable Kurt Campbell has been selected as this year’s recipient of the Marshall Green Award. The Board of Trustees of the Japan-America Society of Washington DC established the Marshall Green Award in 2011 to recognize “an individual or group that has made a sustained and significant contribution to strengthening relations between the United States and Japan, and/or to increasing understanding between the American and Japanese people.”

JASWDC President Ryan Shaffer stated, “The Japan-America Society of Washington DC is thrilled to be able to recognize Kurt Campbell’s contributions to the United States’ relationship with Japan. It is hard to find any one individual who has played a larger role in the shaping of today’s bilateral alliance. Through stalwart support of the US-Japan Alliance from senior positions at the Pentagon, the Department of State, and now at the White House, Dr. Campbell is an architect of the contemporary US-Japan Relationship.”

About Kurt Campbell
Kurt M. Campbell is the Coordinator for Indo-Pacific Affairs in the National Security Council (NSC), serving as the senior adviser to President Biden on formulation and implementation of United States policy in Asia. Before joining the White House, Dr. Campbell was Chairman and CEO of The Asia Group and Chairman of the Center for a New American Security (CNAS). From 2009-2013, he was Assistant Secretary of State for East Asian and Pacific Affairs, after which he received the Secretary of State’s Distinguished Service Award and was recognized by Queen Elizabeth with the Order of Australia and the New Zealand Order of Merit. Dr. Campbell was formerly the CEO of CNAS and director of the Aspen Strategy Group. He was Senior Vice President and Kissinger Chair at the Center for Strategic and International Studies, as well as an Associate Professor at Harvard’s Kennedy School. He previously was Deputy Assistant Secretary of Defense for Asia at the Pentagon and a director on the NSC Staff. He is the author or editor of ten books. He received a B.A. from the University of California, San Diego, a Certificate in music and politics from the University of Erevan in Soviet Armenia, and a Doctorate from Brasenose College at Oxford University as a Distinguished Marshall Scholar.

About the Japan-America Society of Washington DC
The Japan-America Society of Washington DC is a non-partisan, non-profit organization based in the US capital of Washington, DC, which fosters the grassroots relationship between the United States and Japan as well as its citizens. The Society promotes this friendship through more than 70 annual programs and events from cultural activities such as the Sakura Matsuri – Japanese Street Festival, the nation’s largest celebration of Japanese culture, to educational events such as the National Japan Bowl, an annual Japanese language competition. 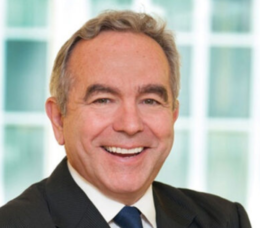