Japan-America Society of Washington DC wishes a happy 90th birthday to its Honorary Chairman Norman Y. Mineta, who was born on November 12, 1931 in San Jose, California.

As Honorary Chairman, Norman Y. Mineta is a dedicated supporter of the Society’s activities, most recently having delivered the closing toast at JASWDC’s 33rd Annual Dinner.

Secretary Mineta was appointed U.S. secretary of transportation by President Bush in 2001 (the first Asian-American member of a president’s Cabinet) and served until July 2006. In 2000, Secretary Mineta was appointed U.S. secretary of commerce by President Clinton. From 1975 to 1995, Secretary Mineta represented the Silicon Valley area of his home state of California in the U.S. House of Representatives, and he also served as vice president of Lockheed Martin and mayor of San Jose, California.

Secretary Mineta and his family were among the 120,000 Japanese Americans held in internment camps by the U.S. Government during World War II. Undeterred, Secretary Mineta joined the army in 1953, after graduating from the University of California at Berkeley, and served as an intelligence officer in Japan and Korea. Throughout his distinguished career he has received numerous awards for his contributions to the field of civil rights and public service, including the Presidential Medal of Freedom and the Grand Cordon of the Rising Sun. Secretary Mineta has also published a children’s book, which shares his experience as a child in a Japanese American internment camp. 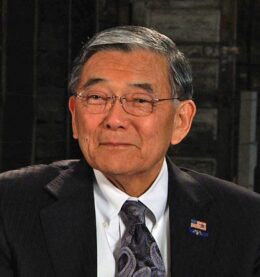