WASHINGTON, D.C. – The Japan-America Society of Washington DC held the 57th Sakura Matsuri – Japanese Street Festival on Saturday, April 8, which saw over 25,000 visitors. The festival brought traditional and modern performers, vendors of Japanese goods, local Japanese restaurants, and artists and artisans from all over the country to the Capitol Riverfront neighborhood to showcase the vibrancy and diversity of Japanese culture.

“This year, most of the visitors stayed longer,” said Marc Hitzig, executive director of the Japan-America Society, of the festival’s attendance. “We spread out the area of the matsuri compared to last year and I think that encouraged more people to come and explore more. There was a lot to do and see, and this showed in the number of people who stayed for hours.”

With over 70 vendors dedicated to promoting Japan through activities, teaching, art, food, or merchandise, the festival provides a walking tour of Japan that changes year after year.

Newcomers included chefs from Matsukawaya, a wagashi (Japanese sweets) chain from Aichi prefecture, Japan, who came to the festival for the first time to hand-roll raw sweets in front of customers, who were then able to enjoy them in a traditional Japanese-style “café.” Nearby at the Culinary Arts Pavilion tent, visitors who attended a presentation about Uji teas from Kyoto tasted some of the finest green tea from the area.

While the Japan Information and Culture Center gave attendees the chance to “visit” Japan with a photo shoot, the Japan National Tourism Organization (JNTO) and Fukushima Prefecture had new booths which encouraged visitors to experience the country and its culture firsthand. Yearly favorites in the Arts & Culture area included kimono demonstrations from Atelier Kanawa, resources and educational activities at the Let’s Learn Japanese tent, and displays of the newest scientific methods from Japan at Sakura Science.

One of Sakura Matsuri’s biggest draws are the Japanese singers and groups who travel all the way to the US capital to entertain American audiences on the festival’s four stages: ANA Riverfront, J-Pop, Sakura, and Martial Arts.

Jr. EXILE from Project Taro, a hip-hop dance and singing group, performed on the J-Pop stage for the first time alongside a lively crowd, as did returning rock band Kanadete sourou.

The Sakura Matsuri – Japanese Street Festival was first held in 1961 and has grown from a small bazaar to an event that draws between 25,000 to 40,000 visitors. It is the largest celebration of Japanese culture in the United States.

The Sakura Matsuri is a Premier Event of the National Cherry Blossom Festival. 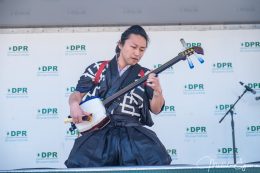