WASHINGTON, D.C. – On April 11-12, 2019, hundreds of the very best and brightest students from across America will gather to put their Japanese Language prowess to the test at the 27th National Japan Bowl held at the National 4-H Conference Center in Chevy Chase, Maryland.

The Japan Bowl® is a national Japanese language competition developed and sponsored by the Japan-America Society of Washington DC (JASWDC) since 1992. However, the Japan Bowl is more than just a competition of language. It tests students’ knowledge of Japanese culture, history, geography, and current events. This year’s National Japan Bowl will draw almost 200 students, plus teachers and family members, from 30 high schools across the United States, from Guam to New York. The popularity and reputation of the Japan Bowl has even spread internationally, and Japan Bowls have been held in Canada, France, Italy, Kazakhstan, Mexico, Poland, Serbia, the United Kingdom, and Kyoto, Japan.

The Japan-America Society organizes the Japan Bowl to recognize and encourage students across the United States who have chosen Japanese as their foreign language. For the students, the Japan Bowl is not just a challenging and fun competition. It also provides a chance to experience Japanese culture firsthand and to meet other students who share their interest in Japan and its language.

Sample Questions
Q: Who was the leader of the Satsuma Rebellion of 1877? Write your answer in Romaji.

AN: Saigo Takamori (or Saigo)

Q: This priest is performing a common ritual. What does it signify? Write your answer in English.

AN: Purification / driving out evil spirits

Event Summary
Students are divided into three levels, based on how long they have studied Japanese. Each school sends a team of two or three students to compete at each level. Teams tackle 90 questions and an oral Japanese interview during the preliminary round, which lasts over two days. Then, on Friday afternoon, the top three teams at each level face off onstage in the National Championship Round, in a setting similar to the famed television show, “It’s Academic.”

About the Japan-America Society
The Japan-America Society of Washington DC is a 501(c)(3) educational and cultural non-profit
organization dedicated to strengthening the relationship between Japan and the U.S. at the
grassroots public diplomacy level. Our programming aims to bring Japanese and American
people closer together in the Nation’s Capital area.

Press Contacts
Media inquiries should be addressed to Nancy Marsden at the Japan-America Society at (202)
833-2210 or japanbowl@jaswdc.org. 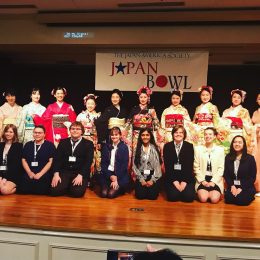