May 4, WASHINGTON DC – Japan-America Society of Washington DC is saddened to learn of the passing of our dear friend and the man who served as our Honorary Chairman since 2008, The Honorable Norman Yoshio Mineta.  He left us on Tuesday, May 3 at the age of 90.

Everyone who knew him called him “Norm,” because he was one of the kindest and most approachable political leaders anyone could know. Norm was a pioneer, not only for the Japanese-American community in our Nation, but for all Asian-Americans.

After World War II began, Norm was taken away from his childhood home in San Jose, California — at the age of ten — and placed behind barbed wire in an internment camp in Wyoming.  His beloved baseball bat was confiscated by the US Army, which said it could be used as a weapon.

Yet Norm never lost faith in his country.  After graduating from college at UC Berkeley, he served in the United States Army in both Japan and Korea.  In 1971 he defeated 14 other candidates to become the Mayor of San Jose, the first Asian-American ever chosen as the mayor of a major city in Mainland America. He repeated that feat three years later when he became the first US Congressman elected from the continental US.   He set even more “first’s” years later, when President Bill Clinton named him Secretary of Commerce, and President George W Bush named him Secretary of Transportation.  He  was the first Asian-American to serve in a President’s Cabinet.  As Secretary of Transportation, he ordered all civilian aircraft grounded after the 9/11 terrorist attacks.  He would become a primary architect of the Transportation Security Administration before the TSA was transferred to the jurisdiction of the Department of Homeland Security .

Norm was a strong and devoted supporter of Japan-America Society of Washington DC, and a regular participant in our activities.  The man whose baseball bat was taken from him as a child got a special kick out of calling “Play Ball!” before our annual outing at Nationals Park.  He regaled young students at our National Japan Bowl with tales of his own effort to learn Japanese at “Saturday school.”   But most of all, he loved coming to our annual gala dinners with his wonderful wife Deni and saying hello to everyone and offering the “kampai.”

Norm, we will miss you.  We appreciate your support of our Society these many years, but most of all we will miss your presence and the warmth and friendship you showed to all our members.  We extend our love and sympathy to your wife Deni and the members of your family.

To remember our Honorary Chairman, the Society will be donating copies of the PBS documentary, “Norman Mineta and His Legacy: An American Story,” to all the schools that participated in the 2022 National Japan Bowl and also to all high schools in the Washington DC area.

Norm left us in May, which is Asian Pacific American Heritage Month.  We hope that every May our gift, which was made possible by the Hiroko Iwami Malott Memorial Fund, will help young Americans to remember Norman Yoshio Mineta and the pioneering contribution he made to our Nation. 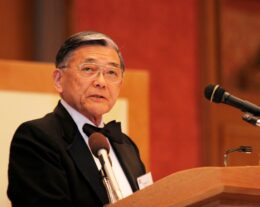