WASHINGTON, D.C. The Japan-America Society of Washington DC is pleased to announce that its Board of Trustees has elected Takaaki Kakudoh, Marie Kissel, Akihiko Nakazono, and Saori Tsuchiya to serve as Trustees of the Society.

Ambassador James P. Zumwalt, Chairman of Japan-America Society of Washington DC underscored the wealth of knowledge and experience these Trustees bring to the Society:

“The Society is fortunate to have a Board with such depth of expertise and enthusiasm for the Society’s work at the grassroots of the US-Japan bilateral relationship. Welcoming Takaaki Kakudoh, Marie Kissel, Akihiko Nakazono, and Saori Tsuchiya to the board this year is a tremendous privilege. This is a huge influx of talent, expertise, and fresh perspective that will serve the Society well in the coming years.”

Takaaki Kakudoh joined Mitsui & Co. as the Senior Vice President & General Manager of the Washington DC Office in 2021.  His 33-year career in Mitsui includes 9 years of overseas experience in total; 6 years working and studying in the U. S. together with 3 years in Brazil, which have enriched his insights into global business. He served as CEO of Mitsui’s 100% owned grain trading and farming company in Brazil and as General Manager of the overseas department of Mitsui’s corporate planning division before his current position in Washington, DC.

Marie Kissel is based in Washington, DC, and serves as Senior Advisor, Government Affairs, at Abbott, a global healthcare leader in diagnostics, medical devices, nutrition, and branded generic pharmaceuticals, which helps people live their best life through the power of health.  Marie was based in Tokyo and led government affairs activities in Asia for Abbott 2013-2020, as VP, Asia Government Affairs and as Senior Advisor.

Akihiko Nakazono is the Senior Vice President & General Manager of ITOCHU International Inc.’s Washington DC Office, where he has served since 2017. Prior to his role in DC, Mr. Nakazono served as ITOCHU’s Senior Officer for the Middle East and was based in Dubai.

The four new members joined the Society’s 27-member Board of Trustees, which comprises business leaders, thought leaders, and current and former government officials from the U.S.-Japan policy community in the Nation’s Capital Region. The Japan-America Society of Washington DC is a non-partisan, non-profit organization based in the US capital of Washington, DC, which fosters the grassroots relationship between the United States and Japan as well as its citizens. The Society promotes this friendship through more than 70 annual programs and events from cultural activities such as the Sakura Matsuri – Japanese Street Festival, the nation’s largest one-day celebration of Japanese culture, to educational events such as the National Japan Bowl, an annual Japanese language competition. 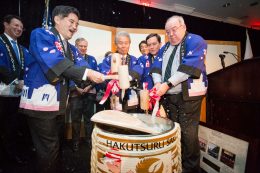