Amb. Malott was recognized for his instrumental role in strengthening the relationship and friendship between Japan and the United States of America, both as a government official and as President of the Society. During his 31 years with the U.S. Foreign Service, he served as the American Consul in Kobe and the Consul General in Osaka. Amb. Malott was also the Director and Deputy Director of the Office of Japanese Affairs in the Bureau of East Asian and Pacific Affairs at the U.S. Department of State. In 2006, he became the President of the Japan-America Society, a position he still holds today.

William T. Breer, former president and chairman of the Society, and Amb. Rust M. Deming, former chairman, were given the same honor in 2007 and 2013, respectively. The Society is proud to have in its leadership officials who have dedicated their professional and personal lives to furthering strong ties between our two countries, and congratulates Amb. Malott on his award.

About the Order of the Rising Sun

The Order of the Rising Sun was established by Emperor Meiji in 1875 and was Japan’s first award in its honor system. Awarded to both Japanese and non-Japanese nationals, it is one of the most prestigious awards and is given to those who have demonstrated notable achievements in international relations and/or promotion of Japanese culture.

Now in its 60th year, the Japan-America Society of Washington DC is a 501(c)(3) educational and cultural non-profit organization dedicated to strengthening the relationship between Japan and the U.S. at the grassroots public diplomacy level. Our programming aims to bring Japanese and American people closer together in the Nation’s Capital area. 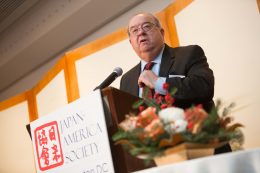