WASHINGTON, D.C. – The Japan-America Society of Washington DC (JASWDC) announced with regret that its President, Ambassador John R. Malott, has informed the Board of his decision to step down from his duties, effective December 31, 2017.

“John Malott has been a pillar of the Japan-America Society of Washington for more than a decade,” said Matthew Goodman, Chairman of JASWDC’s Board of Trustees. “Under John’s leadership, the Society has greatly expanded its visibility and programs, including signature events like the Japan Bowl and Sakura Matsuri. We understand John’s desire to move on to a new phase of his life, but he will be sorely missed.”

Ambassador Malott joined JASWDC as President and CEO in 2006.  During his nearly 12 years with the Society, Ambassador Malott oversaw substantial growth of JASWDC’s educational, cultural, and policy programs, including:

The Society has also greatly expanded its educational and cultural outreach programs under Ambassador Malott’s tenure, including re-launching the annual Tanaka and Green Scholarships to support Americans students spending a semester or more at a university in Japan.

In announcing his retirement, Ambassador Malott said that what he has enjoyed most about his time at the Japan-America Society has been working with the many young people — interns, volunteers, and staff — who share the same passion for Japan and its people that he has always felt. “They are the future of our relationship and our Society,” Amb. Malott said, “and I hope that JASWDC will always keep its focus on the next generation.”

The Society is also honored that the Government of Japan this year recognized Amb. Malott’s many contributions to the US-Japan relationship over the course of his diplomatic career and his service at the Japan-America Society by awarding him the Order of the Rising Sun, Gold Rays with Neck Ribbon. 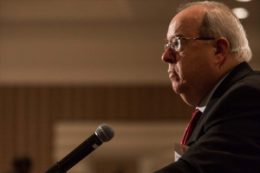