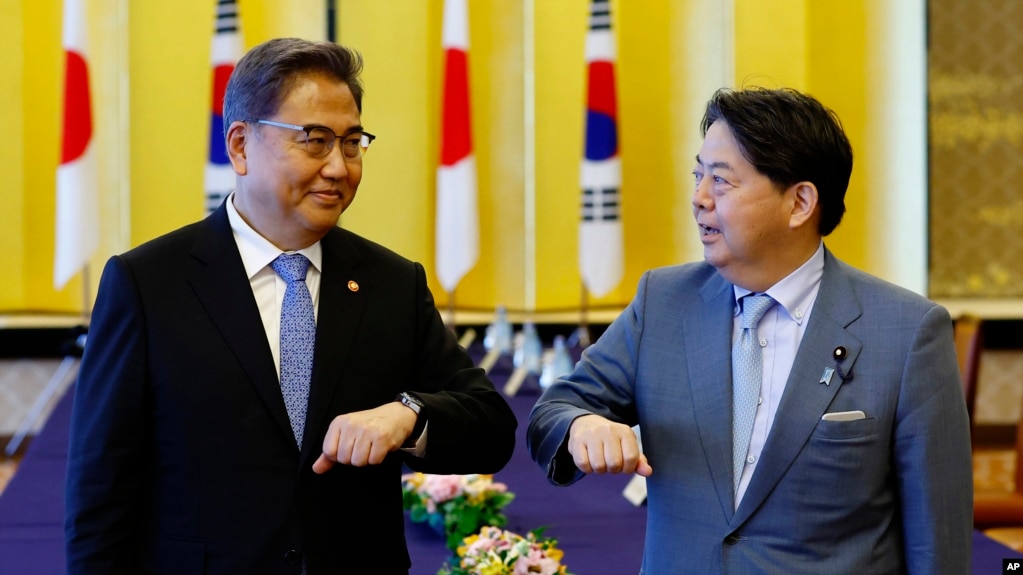 WASHINGTON — As South Korea and Japan agree to improve bilateral ties, experts say the latter’s possible constitutional revision allowing military expansion should be in line with the Biden administration’s effort to forge a strong Washington-Seoul-Tokyo trilateral front against the threats of China and North Korea.

Park’s meeting with Hayashi comes as talks of revising the Japanese constitution to fill out its military have accelerated since the assassination on July 8 of former Japanese Prime Minister Shinzo Abe, who strongly advocated for the agenda.

Kishida, the LDP leader, said on July 11 he will push for a constitutional revision to build on Abe’s legacy.

Talks of reforming Japan’s constitution — mainly the “no war” clause of Article 9 that formally renounced war and banned use of Japan’s military to settle international disputes — involve doubling its defense spending to 2% of its gross domestic product and creating counterstrike capabilities to preemptively destroy incoming missiles, according to NPR.

Japan’s possible expansion of its military has raised concerns in South Korea, where some are concerned it will pose challenges to President Yoon Suk Yeol’s desire to improve Seoul’s ties with Tokyo — a goal that dovetails with Washington’s vision of strong trilateral security cooperation in East Asia.

During the G-20 foreign ministers’ meeting in Bali, Indonesia, on the same day Abe was assassinated, Park, Hayashi, and U.S. Secretary of State Antony Blinken held talks in which they agreed to bolster cooperation against challenges posed by China’s aggression and North Korea’s missile threats. 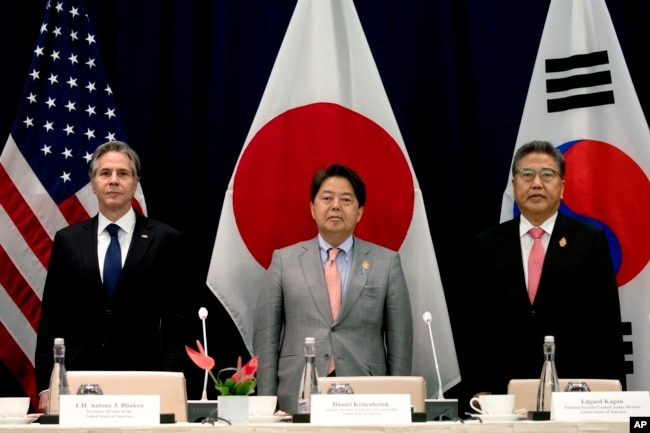 South Korea’s historical grievances stem from the Japanese occupation of the Korean Peninsula in the first half of the 20th century. Koreans accuse Japan of forcing women to work in wartime brothels for the Japanese military and using forced labor, among other abuses. Japan says it has apologized for its World War II activities and for what Prime Minister Naoto Kan in 2010 called “the enormous damage and suffering” caused by colonization.

Experts said that in the current security environment, a Japanese military expansion would support the Biden administration’s effort to counter Chinese or North Korean threats through trilateral cooperation.

VOA’s Korean Service contacted the South Korean Embassy in Washington for comment on how a Japanese constitutional revision would affect Seoul’s efforts to improve ties with Tokyo. On Monday, the embassy referred the inquiry to the Foreign Ministry in Seoul, which has yet to respond.

“There is expectation for Japan to boost its defense capabilities in light of growing threats from China as well as North Korea,” said Shihoko Goto, deputy director of the Asia Program at the Wilson Center. “Revising the constitution to allow Japan to play a more active role in regional security would be part of that strategy, which is in line with Washington’s expectations.”

Goto added, “The need for both Tokyo and Seoul to be on the same page in assessing regional threats will be critical so the increasing expenditure and commitment are not seen as a threat to South Korea.”

A spokesperson for the Japanese Embassy in Washington told VOA’s Korean Service on Friday that Tokyo would continue to communicate with Seoul to mend their ties, which is urgent considering North Korean threats. Pyongyang conducted 19 rounds of weapons tests this year, including artillery firing drills on July 10. [[ https://www.voanews.com/a/n-korea-likely-fired-artillery-rounds-amid-us-s-korea-drills-/6652758.html ]]

“We have no time to spare in improving Japan-ROK relations,” wrote Japanese Embassy spokesperson Masashi Mizobuchi in an email, using the acronym for the Republic of Korea, South Korea’s official name. “The Japanese government will continue to communicate closely with the Korean government in order to restore the Japan-ROK’s extremely severe[d] relations to a healthy state, based on Japan’s consistent position.”

On trilateral cooperation, Mizobuchi said, “Japan, the U.S., and ROK seek to enhance collaboration at multiple levels in various areas including strengthening security cooperation, given the strategic importance of coordination among the three countries for regional stability including responding to North Korea’s nuclear and missile threat.”

Mizobuchi declined to comment on how a possible constitutional revision could impact Tokyo-Seoul relations, stating it is “ultimately for the Japanese people to decide” in a special referendum after a concurring vote of two-thirds or more in each house of the Diet, Japan’s bicameral legislature.

Stanford’s Sneider said such a revision, which would take some time to realize, should not hinder efforts to improve bilateral ties that impact the national security interests of Tokyo and Seoul, although a revision could be “a little bit of a troubling idea” for South Koreans “if it’s not accompanied by a clear and sincere expression, an apology and regret for its wartime aggression.”

James Zumwalt, former deputy assistant secretary of state in the Bureau of East Asia Affairs and now the chair of the Japan-America Society of Washington DC, said similarly, “It will be very important for Japan to communicate clearly and closely with neighbors in the region, including South Korea, about its intentions in order to assuage those concerns.”

South Korea’s Supreme Court ordered Japan’s Nippon Steel Corporation and Mitsubishi Heavy Industries to compensate some wartime forced laborers in a 2018 decision. The court is expected to make a final decision in August or September on whether to liquidate the companies’ assets, according to Reuters, and Tokyo is warning of serious repercussions if the orders are enforced.