WASHINGTON, D.C. – CineMatsuri, Washington D.C.’s Japanese Film Festival, returns to the Nation’s Capital for its fifth year on Tuesday, March 20. The films represent some of the best and most recent Japanese cinema, and the festival has earned praise for its thoughtful and entertaining selection of movies which aim to illustrate different facets of Japanese culture through multiple genres.

The 2018 lineup is as follows. For more information regarding the dates, times, and locations of the films, please see www.cinematsuri.org.

Machiavelli goes to Japan in this political comedy about a high school student who plots his path to become the Prime Minister of Japan.

A documentary about an elderly couple who are living “one with nature,” it provides many insights into Japan’s mottainai culture, as well as aging in Japan.

A romantic comedy about a couple that split, but still continue to live together for convenience.

After last year’s sold-out success, CineMatsuri Shorts will return to the CineMatsuri lineup for 2018. For one day only, the Society will showcase the future of Japanese cinema by screening seven short films from up-and-coming Japanese directors, actors, and screenwriters. CineMatsuri Shorts is produced in cooperation with Short Shorts Film Festival & Asia, a Japan-born, Academy Awards®-accredited event that is now one of the largest film festivals in Asia.

CineMatsuri is produced and presented by the Japan-America Society of Washington DC and is a participating event of the National Cherry Blossom Festival. All films for both CineMatsuri and CineMatsuri Shorts are shown in Japanese with English subtitles.

Further information about CineMatsuri, including descriptions and trailers of each film, ticketing, showtimes, and locations, can be found on the festival’s website at www.cinematsuri.org. Tickets are $13 per film for members of the Japan-America Society of Washington DC and $15 for non-members. We strongly encourage that tickets be purchased in advance.

Media inquiries should be addressed to Melissa Tolentino at the Japan-America Society at (202) 833-2210 or info@jaswdc.org. 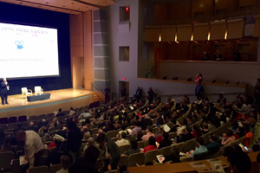