WASHINGTON, D.C. – The Japanese Ministry of Foreign Affairs has once again invited the top student winners of the Japan Bowl to visit Japan. The Ministry’s Kakehashi Project, which is an initiative meant to encourage young people to interact and build bridges with Japan, invited over 40 students to attend the 2018 trip. In all, 52 participants – including chaperones and students from the Ontario Japan Bowl and Metro Vancouver Japan Bowl in Canada – will travel to Japan from July 3-11.

Because of this year’s large number of students, the trip will be divided into two groups. Each group will visit a different part of the country – one will head to Sendai in Miyagi prefecture, and the other to Nagasaki – to experience homestays, interact with Japanese students at local schools, and attend cultural workshops. Both groups will then convene in Tokyo, where they will visit Honda Motor Co., Ltd., attend a program sponsored by the Japan Bowl Supporters Group (JBSG), and explore famous sites in the city. In addition, they will meet with senior government officials as well as Her Imperial Highness Princess Takamado. The U.S. Embassy’s American Center will also hold a reception for all of the students.

The 26th National Japan Bowl took place in Washington, D.C. on April 12th and 13th of this year. Over 200 students from 30 schools took part in the competition, with representatives coming from all over the United States and its territories. The Japan Bowl tests students’ knowledge of Japanese language and culture, and allows them to form friendships with likeminded students who are also studying Japanese.

The Japan Bowl is an academic competition that tests the achievements of high school students throughout the United States who are studying the Japanese language. Beginning in 1992, it grew from a language-only competition to one that asks students about their knowledge of Japanese culture, history, society, sports, behavior, and current events. The Japan Bowl is now also held worldwide, with new international bowls each year. 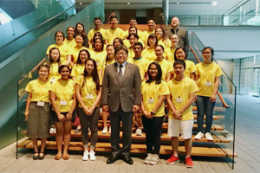