WASHINGTON, D.C. – On May 25, the Japan-America Society of Washington DC and the National Park Service met at an elementary school in Tenleytown – but instead of planting cherry blossom trees, they brought two new azalea bushes to the school’s grounds.

The Society’s educational outreach program, Japan-in-a-Suitcase (JiS), chose the National Presbyterian School on Nebraska Ave to be the inaugural site of a new friendship program that also involves the National Park Service’s Friendship Mural project as well as the City of Mitaka in Tokyo, Japan.

The National Presbyterian School was chosen because they have been welcoming JiS to their second grade classes every year for over seven years.

The friendship program consisted of three parts. First, JiS read a story explaining the history behind the Tidal Basin’s cherry trees. Ranger John Kirkpatrick from the National Park Service then discussed the importance of diversity with the second graders, emphasizing friendship despite cultural differences. He explained that the Park Service’s Friendship Mural project, in which American students send friendship-themed artwork to Japan and vice versa, was created to be a bridge between countries.

For the final, hands-on part, everyone moved outside to assist in planting the two new azalea bushes. Azaleas were chosen because they bloom after cherry blossoms, and are a symbol of the year-round bond between Japan and the U.S.

This friendship program was heralded by Kenichi Kawase, who is a descendant of Shuntaro Kawase, a plant specialist who picked the Japanese cherry trees that were sent to the United States in 1912. Kawase, who works with the City of Mitaka’s government, had already been working with the Friendship Mural project and saw another opportunity with Japan-in-a-Suitcase and the program’s regular outreach to schools in the DC, Maryland, and Virginia area.

Japan-in-a-Suitcase is the Japan-America Society of Washington DC’s educational outreach program that brings Japan to classrooms in the DC, Maryland, and Virginia area. The program visits over 40 schools, libraries, and organizations every year and reaches out to about 2000 students to introduce them to the language, culture, and customs of Japan and interest them in the world beyond our shores. 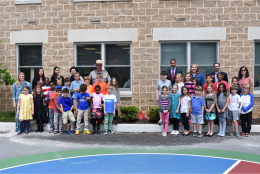