US must take seriously China’s interest in Pacific trade pact Li Keqiang told reporters at a press conference on May 28 that China is willing to consider joining the CPTPP.   © Getty Images

Wendy Cutler is Vice-President of the Asia Society Policy Institute and sits of the Japan-America Society of Washington DC Board of Trustees.

Given the focus on the Hong Kong national security law, the international community paid little attention to the statement by Chinese Premier Li Keqiang at last week’s National People’s Congress that China “has a positive and open attitude toward joining CPTPP.” The Comprehensive and Progressive Agreement for Trans-Pacific Partnership is a trade agreement involving 11 countries including Australia, Canada, Vietnam and Japan.

This is not the first time China has expressed some interest. But it is the first time such interest has been conveyed publicly by the Chinese leadership. The motivation and timing of the statement are curious and could be interpreted seriously or with skepticism. Regardless, it cannot and should not be ignored, particularly by the U.S.

In the early days of negotiations for the TPP, the CPTPP’s predecessor which included the U.S., the word in Beijing was that it was a U.S. strategy to contain China by enlisting its neighbors in a trade deal without the largest Asian economy. This view changed, however, as negotiations proceeded, an evolution captured in a statement by a Foreign Ministry spokesperson who conveyed China’s “open-minded attitude toward TPP.”

I will always remember my first trip to Beijing in early 2016, soon after ending my almost three-decade career in the Office of the United States Trade Representative. The TPP talks had just concluded and other countries were lining up to express interest in joining. The lengthy text had been translated into Chinese, and in my meetings with the Chinese government, academia and business community, I was peppered with questions on specific provisions and what they might mean for China, should it consider joining.

But once the U.S. had exited from the deal under President Donald Trump, the TPP looked dead. Remarkably, with Japan’s leadership, the other members decided to go forward without U.S. participation rather than squander all the work they had invested, bringing the CPTPP into effect among seven of the 11 members about 18 months ago.

Since then, China has quietly approached certain CPTPP members to learn more about the agreement and informally explore their views on possible Chinese accession. While these overtures have not yet led to anything concrete, they demonstrate a continuing interest, which appears to have risen to a new level by May 30 with Li’s statement.

A number of considerations seem to be motivating China. First, with the U.S. on the sidelines and negotiations on the Regional Comprehensive Economic Partnership, an Indo-Pacific trade deal, heading toward signature this November, it would provide another avenue for China to integrate its economy with others in the Asia-Pacific region.

Secondly, it could help reduce China’s reliance on the U.S. market and its vulnerabilities to further tariffs and other sanctions emanating from Washington. At the same time, acceding to CPTPP could provide external pressure, similar to the role that World Trade Organization accession played two decades ago, for Beijing to proceed with certain needed domestic reforms, particularly in the services sector.

Finally, it could be a great public relations coup for Beijing to show the world that it is serious about trade liberalization and structural reform while the U.S. slips further into protectionism.

However, CPTPP members should be under no illusion that China’s interest might lead Trump to reconsider U.S. participation. Conversely, it could further harden his position, criticizing the CPTPP, as he has the WTO, as an ineffective agreement for addressing China’s unfair trade practices.

Of the seven CPTPP members that have ratified the agreement, Singapore has been most vocal in support of Chinese accession. In an interview with the Nikkei Asian Review a year ago, Prime Minister Lee Hsien Loong said, “Singapore’s view is that we welcome China to join.”

In a January 2019 meeting, CPTPP members established a detailed accession process that spelled out bench marks for joining the pact. In particular, they asked candidates to show that they could “comply with all of the existing rules contained in CPTPP.” Furthermore, they called for comprehensive market access commitments. 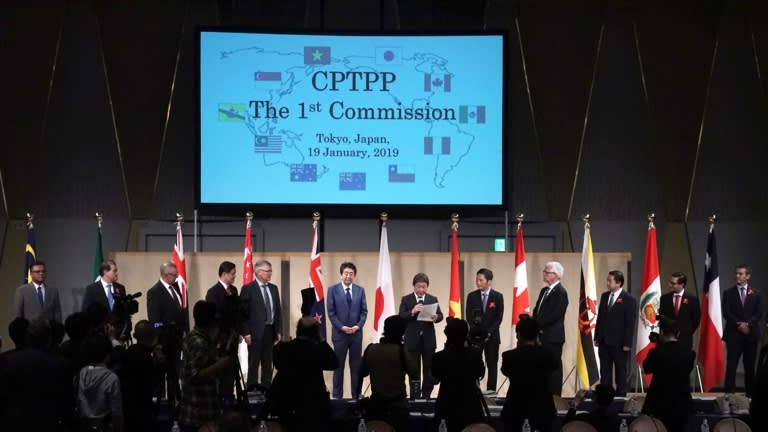 Ministers of a Pacific Rim trade bloc during an opening session of the CPTPP in Tokyo in January 2019: they called for comprehensive market access commitments.   © AP

Fulfilling both requirements would be an incredible challenge for China, especially as its economy becomes more state-driven. Bringing Chinese practices in line with CPTPP commitments on such matters as state-owned enterprises, labor, e-commerce and investment would be a heavy lift for China, as would Beijing achieving the high rates of tariff liberalization met by other countries.

This should not mean that working toward accession is a futile exercise, albeit one with a long time horizon. If China were to take the market-opening actions over time to match the positive attitude expressed by Li, this would be a welcome step for a beleaguered global trading system. Time will tell whether there is any substance behind Li’s words on CPTPP.