The Japan in a Suitcase team at JASWDC has put together a fun coloring sheet for kids to decorate and enjoy. This activity features an Amabie アマビエ (ah-mah-bee-ay) – a half mermaid, half bird-like creature or yokai, which appears in Japanese folklore.

A yokai is a supernatural spirit that often helps people during difficult times. Legend states that in 1846, a government official saw the Amabie emerge from the water. It had fish scales, long hair, three fins, and a beak. The mysterious creature predicted two things: a rich harvest would come to Japan for the next six years and a pandemic will devastate the country. The Amabie instructed that everyone should draw images of him in order to prevent the pandemic. Images of the Amabie were first seen in a local newspaper and they soon spread throughout Japan. For over a hundred years, the Amabie has been silent but has recently resurfaced due to COVD-19. Artists have been drawing the yokai in order to ward off the pandemic. The image has also been seen throughout social media and has even started the #AMABIEchallenge.

We have created an Amabie image for you to color yourself and hang in your house to ward off the current COVD-19 pandemic. May it protect you and your family! 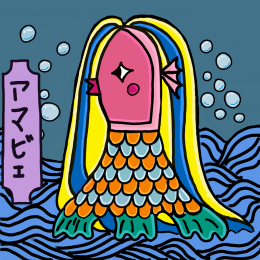